I not only just returned from an amazing vacation – which I hope to share more about in future posts -but this past weekend I got a chance to attend Cine Festival here in San Antonio.   Cine Festival celebrated its 35th anniversary this past week, showcasing 8 nights of Latino films at the Guadalupe Cultural Arts Theater.

To be honest, I had completely forgotten it was going on because I was going to be out of town the entire week.  Fortunately, a day before my return I saw the following tweet from Gina Rodriguez – actress and star of Filly Brown.

What?  Gina was going to be in San Antonio, showcasing Filly Brown, the night I return from my vacation?   I knew I had to find a way to make it…and make it I did 😉

See, I’ve heard about Filly Brown from Gina since we met at Hispanicize (the conference that started me on my blogging journey) last year.  Since then I’ve followed her career and have become a strong admirer of her drive to advance women and Latinos in Hollywood and beyond.

I was originally bummed because when I arrived in San Antonio and looked online for tickets, I got a message stating that ticket sales had closed, leading me to believe that I had lost my chance to see Filly Brown and Gina in my city.  I tweeted my woes and Cine Festival tweeted back stating that I still had time and could just show up and pay at the door.  I was ecstatic and changed quicker than I had changed before.

The trailer gives you a taste of what you can see April 19th, the US release date, but being there at Cine Festival and seeing it, I can tell you there was laughter and tears.  It’s a great film, with great beats, that will keep you engaged from start to finish.

As emotional as it was for us, getting involved in the storyline, the cast (Gina Rodriguez and Lou Diamond Phillips) and the Director (Michael D. Olmos) were even more emotional as they took the stage.  Why?  Because it was the first time they had all seen the film since the passing of their cast member – Jenni Rivera. 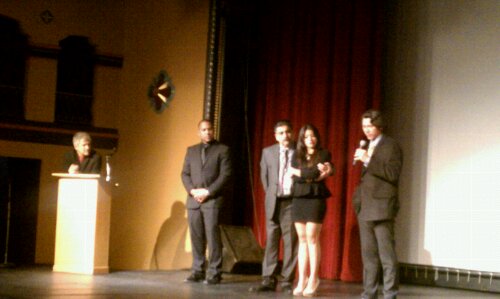 While they shared their joy of having worked with her and echoed the same sentiments of Jenni being gone too soon, they managed to push through the sadness and chose instead to celebrate her last acting role in Filly Brown.

All in all, I was over the moon at having been able to make it to Cine Festival and share a few moments with the cast of Filly Brown, especially my girl Gina Rodriguez.  🙂

Below are a few more pics of the night, along with a couple of bonus videos of Gina rapping her break out track from the film and Lou Diamond’s response when asked to sing La Bamba.

Have you ever been to your local film festival?  What was the last film you saw?

Lets Connect
Rocio Chavez
Digital Content Creator & Multimedia Designer at Your Sassy Self
I'm a Mexican-American, Sassy, Bilingual, Professional Woman with a passion for life long learning, sharing, and living my best life. I'm the founder and digital content creator for Your Sassy Self and work full time as a Multimedia Designer. Let's connect and see how we can change the world...or at least change our perspective of it. 😉
Lets Connect
Latest posts by Rocio Chavez (see all)
CHECK OUT:  Trendy, Affordable Fashion Finds at the San Antonio Apricot Lane Boutique
Powered by Inline Related Posts