Disclosure:  I was not compensated for this DIY Doggie Gate post, but Habitat Home Center provided four closet bi-fold doors (each valued at $14.99) for this #DontTrashIt project.  However, all views and opinions expressed are strictly my own.

I’ve always been a huge fan of DIY projects, but I will say I’ve done them less and less now that I’m settled in my home.  When I first became a homeowner however, I was all about renovation.  In fact it took me six months to complete the renovations on my home and they were all done via DIY projects.  While I won’t go into details on those projects I will say that Habitat Home Center has been there with me every step of the way.  Since I had just bought a home, I wanted to find a way to save money, while helping my community at the same time.  Once I stepped foot into my first Habitat Home Center, I knew there were many things I could purchase there to help me.  My most recent trip was no different. 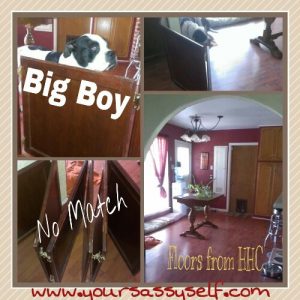 Actually my idea for this DIY project was based on a needed improvement on a previous DIY custom doggie gate idea.  As most doggie parents, I tend to keep my dogs contained to my kitchen area when I’m out.  Unfortunately that area’s entry into the rest of my living space is 7 1/2 feet wide, which made my initial search for a pre-made solution hard to find and super expensive to have made.  As a result, I allowed my creative juices to start flowing and on a trip to the Habitat Home Center I realized that I could connect cabinet doors together to form an inexpensive accordion type gate which I could stretch out across the opening upon leaving and could be compressed to keep it out of the way while I was here.  It worked like a charm for over 8 years, however with the entry of my BF’s (boyfriend’s) dog, the Chihuahua approved doggie gate was no match for this American Bulldog.  The gate was too light and we found that he was easily pushing it open during the day and would spend his day laying on our couch and getting into trash, which is a big no, no in our house.  So in came the need for another custom DIY doggie gate option. 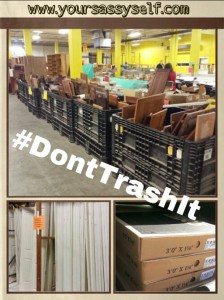 As I walked into the Habitat Home Center for the #DontTrashIt project, I realized that the cabinet doors available were simply not heavy enough or tall enough to stand up to the wear and tear of an American Bulldog, so I went looking for better options.  In popped the closet bi-fold doors.  Upon examination, I realized that they were definitely heavier, taller and already came with hinges…ding, ding, ding we had a winner.

I had originally envisioned this custom doggie gate makeover as a full blown room partition.  When I placed the bi-fold doors in my space however, I realized they were taller than I had anticipated and decided to have my BF cut them in half.

We removed the hinges and screws and my BF began making his cuts.   Once he was done, I moved in and wiped off the dirt and sawdust from the cutting process with a wet rag.  I then started priming one side of each door with left over Zinsser Primer.  After an hour of priming, I allowed them to dry overnight and then added another primer coat, which took about 30 minutes to complete.  I again let them sit overnight.  Once I had some free time again, I took some leftover paint (brick red) and rolled it over each primed side.  This whole process only took 30 minutes.  I again let them sit overnight to dry.

The next day I took a left over Whataburger cup, a sponge brush and some more leftover paint (soft yellow) and painted the rim of the Whataburger cup to add my own artistic flair to my custom DIY doggie gate.  🙂  (I must confess I was a bit concerned about my artistic abilities, but It turned out well.  I’m even considering creating some art for the walls using the same process.  :D)

The pieces were again allowed to dry overnight and I then spent about 30 minutes putting the hinges back on.  In order to give the doors more stability, I stuck with the accordion feel and placed one set of hinges on the painted side and then the next set on the original finish side and so on and so forth.  Then our custom DIY doggie gate was up and running again.

What DIY projects are on your horizon?  Do you prefer to repurpose or start new?

Habitat for Humanity of San Antonio owns and operates the Habitat Home Centers located at 311 Probandt, 5482 Walzem and 8125 Meadow Leaf. The Habitat Home Centers are home improvement thrift stores that sell both new and used home improvement materials to the public; they also take in donated items from businesses and individuals. All proceeds from sales in these stores help Habitat for Humanity of San Antonio. To make donations please call 210-223-3647.