A few weeks ago I was introduced to the Adelante Movement thanks to Hispanicize 2013.  My friend Melanie had spoken very highly of it from her experience during the 2012 tour and I was hooked on learning more once I found out that legends Rita Moreno and Charo would be speaking on the Adelante Movement panel, hosted by founder, Nely Galan.

The event began with Nely reviewing why she decided to start the Adelante Movement  – to help women gain the economic freedom to make choices for themselves and everyone else in their lives – by sharing the things that we as women tend to put ahead of ourselves (below are a few of those things). 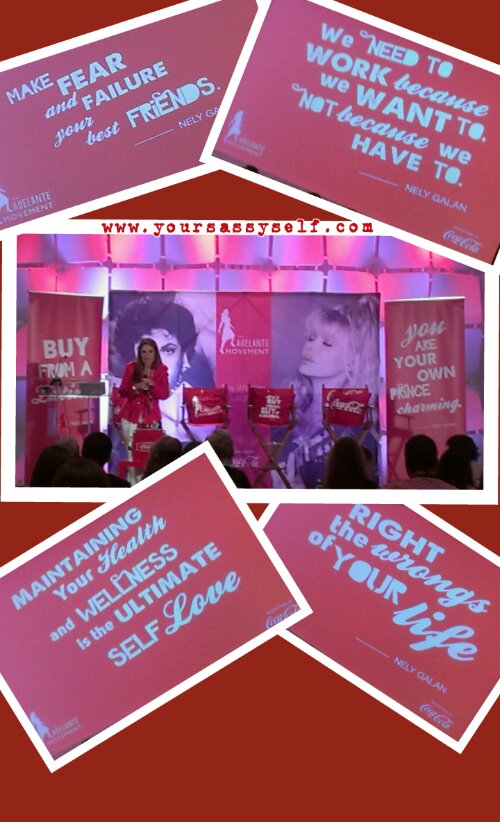 Then legend Charo took the stage to share her story.  She shared stories about her first marriage (which was an arranged “Hollywood” marriage) and how she got to where she is now through lots of hard work and preparation.  When she was asked if she would change anything, she stated she would not because everything she’s experienced has afforded her the ability to invest wisely in various properties, which is one of the highlights of Nely’s Adelante Movement.  She also added however, that although she’s met Presidents, Kings and Queens, if tomorrow she had to sell fruit on the street, she would do it with the same dignity  she does everything now.  Charo is a true entertainer through and through and she kept the room laughing and engaged through out her presentation, which ended with her providing us her secret to her fountain of youth (check it out below).

Legend Rita Moreno then shared her story about her rise in Hollywood.  She shared that when her mother first took her to meet with MGM, they coined her the Spanish Elizabeth Tailor and she knew she had made it.  She also shared some of the difficulties of being a beautiful woman in a male dominated Hollywood.  It was amazing to hear of her strength as she pushed her way through and it was even more wonderful to hear her closing song (enjoy it below).

Overall, I am enamoured with Nely Galan’s drive to start and continue to spread the word on the Adelante Movement and I look forward to the opportunity to continue to share their word and hopefully one day partner with this amazing cause.

Thanks Melanie Mendez-Gonzales from ¿Qué Means What? for taking the pics of me with the Latina Legends of the Adelante Movement and for being an awesome friend and fellow Latina blogger. 😀

What moves you to move past stereo types and seek to be the best you can be?  How do you lend a helping hand to those who are trying to get to to a similar place?

Lets Connect
Rocio Chavez
Digital Content Creator & Multimedia Designer at Your Sassy Self
I'm a Mexican-American, Sassy, Bilingual, Professional Woman with a passion for life long learning, sharing, and living my best life. I'm the founder and digital content creator for Your Sassy Self and work full time as a Multimedia Designer. Let's connect and see how we can change the world...or at least change our perspective of it. 😉
Lets Connect
Latest posts by Rocio Chavez (see all)
CHECK OUT:  Black Bean Dip - Perfect Appetizer
Powered by Inline Related Posts